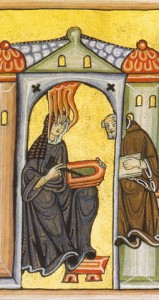 The life of Hildegard of Bingen (1098-1179) was also marked by light in all shades and colours until the time of her death, when, according to legend, a radiant light is said to have appeared in the heavens. But even more so, light was the starting point, the igniting spark, and the life-giving fire of her entire work. The encounter with the light struck like lightning in her hitherto completely inconspicuous life.

She herself describes it in this way: „In the year 1141 of the incarnation of Jesus Christ, when I was 42 years and 7 months old, a fiery light accompanied by lightning came down from heaven. It flowed through my brain and glowed in my chest. And suddenly the meaning of Scripture was disclosed to me…“ And she heard the instructions: „Write down what you see and hear!“ The penetration of the light and the gift of vision connected with it gave Hildegard of Bingen the reputation of a seer and prophetess. Who was this woman who held her contemporaries spellbound as much as people in our day who are searching for meaning, wholeness and healing?

Is it worth getting to know her life and work and to become absorbed in it? Can we succeed in leaping across the space of 900 years without plunging into the abyss of history? Is there ground for further comparisons between the turn of the first millennium and the one into the third now, other than the general loss of faith and direction and a weakness of character as well as the increasing loss of the Church’s authority? We have very few historically reliable facts on Hildegard of Bingen. She was born in the year 1098 into the House of Bermersheim, a family belonging to the Frankish higher nobility.

According to her contemporary Vita, Hildegard had 9 brothers and sisters and at the age of 14 – as was quite customary then – was given to the recluse Jutta of Sponheim, who lived in a hermitage adjacent to the monastery of Disibodenberg, in order to receive an education. Therefore, from an early age, the Benedictine rhythm of life, alternating prayer and work, study and spiritual reading, community life and solitude, left a decisive mark on Hildegard. In the year 1136 Jutta died and Hildegard took over the spiritual leadership of the small community, which had formed over the years in the hermitage. Up to her 41st year Hildegard’s life moved along the lines of the simple regularity of everyday cloistered life.

Nonetheless, we can assume with certainty, that she acquired a profound education in those early decades of her life. Even though she refers to herself in her later work as an unlearned woman – most likely referring to the fact, that she had not received a formal education in the classical disciplines of dialectics, rhetoric and grammar – Hildegard had a broad knowledge of the bible, theology, philosophy and natural history. Above all, the richness of the Scriptures, which was disclosed to her in the liturgy, in the Rule of St Benedict, and also the study of the writings of the Church Fathers and the Desert Fathers, were to her an inexhaustible source of inspiration, which formed the basis of her entire work. In her writing, knowledge and wisdom, a natural ability for insight and inspired learning blend in inseparable unity.