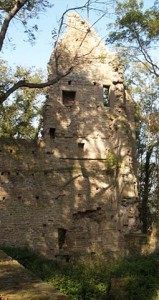 Hildegard’s work had strong visionary and prophetical characteristics, which were totally in line with how she saw herself. For her, divine origin of what she saw and heard in the overly bright light and the awareness of a sense of mission as a prophet belong inseparably together.

Her prophetic mind wanted to rouse the people of her time, persuade them to change their ways and act against a growing godlessness. Hildegard perceived herself as God’s advocate, spokeswoman and instrument. Time and again she directed attention to the mystery of the Almighty and disclosed divine love to her readers and listeners as the source and completion of all being. She did not, however, preach a spiritual mysticism or unworldly inwardness.

Her motivation was a religious interpretation of the whole universe and living a consistently Christian life in the world. Everything, heaven and earth, faith and natural science, human life in all its facets and possibilities, was for her a mirror of divine love, and therefore pointed transparently to the Creator. Hildegard of Bingen wrote three large theological works – not because she enjoyed writing, as she repeatedly emphasized, but out of an obligation to make known, what was disclosed to her in her visions. In the preface of her first and main book „Scivias“ (Know the Ways), she describes how great an effort it was to write and how strong the inner resistance was which she had to overcome: „Only when God’s scourge confined me to the sick-bed,…I finally got down to writing…“ What emerged during the next decades of laborious work, was one of the most impressive panoramas of the medieval world – incidentally not seldomly described as the anticipation and basis of Dante’s „Divina Commedia“. In her first work „Scivias“, Hildegard succeeds in spanning the history of salvation from the creation of the world and of man to redemption and fulfilment at the end of time. The never-ending story of God and man, the drama of man’s turning away and back again to his creator is portrayed here in a unique way.

Hildegard attempts to describe the unspeakable mystery of God in ever-new images. Her visions, which are all composed in the same way (1: the vision itself as seen; 2: the explanation of the vision; 3: the theological and spiritual explanation) fascinate the reader in the commanding way in which Hildegard deals with the sources, which she lets flow creatively and freely into her total vision. Equally impressive is the elemental power of imagery in her language, though it must be said that this, at times, does not make it easy for a reader of our own day to comprehend Hildegard’s thoughts and interpretations. In accordance with the wealth of content and versatility of her work, Hildegard also had immense possibilities of linguistic variation at her disposal: she was as much a master of the narrative style as of the dramatic, the scientific as much as the lyrical. She filled old concepts with new meaning, created completely new words, composed songs and hymns and, last but not least, worked as a dramaturge.