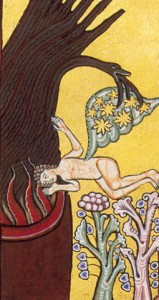 Hildegard composed and wrote the text to her lyrical drama „Ordo virtutum“ (The Play of Forces) in which she shows the ongoing battle between good and evil, happening over and over again with man and in the world, with 35 dramatic dialogues between virtues and vices.

This allegorical musical drama – the first with musical accompaniment that has come down to us – had its first performance in 1152 at the Abbey of Rupertsberg, where Hildegard, together with 20 nuns, had moved to from Disibodenberg in the year 1150, after a long and difficult dispute. 800 years later, in 1982, a second world premiere followed in the monumental Romanesque ambience of St Martin Major in Cologne.

The basic theme of „Ordo virtutum“ is found in theological terms in Hildegard’s second main work, the „Liber vitae meritorum“ (The Book of Life’s Merits). Here, too, the theme is again and again man having to decide between good and evil, between belief and unbelief, between turning to and away from God: Virtues and vices encounter one another in rhetorically masterful staged disputations and argumentation. These are often interrupted by the words of „vir“ (God), whose form reaches from heaven to the depth of the abyss.

It is Hildegard’s main concern that man is created free, and the decision is placed in his hands for his entire life, to fulfill what is laid down in his creation: to be God’s image. „Man, become what you are: be human!“ This idea could imperceptibly have been taken from Hildegard’s thought.