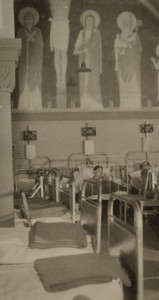 The time of the National Socialist regime and the Second World War brought many trials to the monastic community at the Abbey of St Hildegard. As early as May 1941, Abbess Regintrudis Sauter made part of the abbey buildings available as a military hospital and put twenty sisters at the disposal of the Wehrmacht as nurses, caring for the wounded, and for administrative work – in the hope of saving the abbey from being closed. This was not to be. On July 2nd, 1941, the 41st anniversary of the laying of the foundation stone, 115 nuns were expelled by the secret police force (Gestapo). The sisters had to leave the convent and the monastic estate was confiscated.

The majority of the community was received by various orders of charity, notably the congregations of Waldbreitenbach and Dernbach as well as the Borromaean sisters of Bingen. The Eibingen nuns worked in hospitals, nursing homes and other areas for the remaining years of the war. A small group of the Eibingen convent remained at St Hildegard to care for the wounded as Red Cross helpers or to take care of domestic matters at the military hospital with its 100-130 patients. Rüdesheim was largely destroyed in a bombing raid in November 1944, but the abbey buildings were spared. However, since the main military hospital and the operating theatre at Eibingen had been destroyed by bombs, the number of beds at the hospital’s branch in the abbey buildings was raised to 325. A few weeks before the end of the war, on March 19th, 1945 the military hospital at Eibingen was closed down. A few days later American troops moved into Rüdesheim. Soon the estate was returned to the convent. Parts of the monastic buildings were made available to senior citizens of Rüdesheim, who had been made homeless by the bombing raid, and also to accommodate refugees from the East of Germany for the next 10 years.