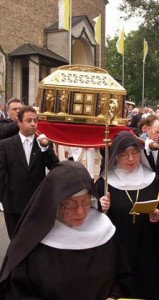 Hildegard also expressed her prophetic concerns most distinctively in her letters. From her extensive correspondence, 390 letters have come down to us: testimony of her intrepid directness, admonishing concern, refreshingly humorous generosity, personal commitment and far-reaching exertion of influence in (church) politics.

She once wrote to a disheartened, self-tormenting abbot: „Remember that you are an earthly man and do not be so afraid, for God is not looking for too much of the heavenly in you!“
One can gather from all of her correspondence that Hildegard was a well-recognized authority in her lifetime. Her advice was sought after, even when it was unpleasant and on no account complimentary. Her contemporary biographers report the same of her sermons, which she preached in market squares and cathedral precincts all over the country: in Cologne, Trier, Metz, Würzburg and Bamberg, in Siegburg, Eberbach, Hirsau, Zwiefalten and Maulbronn. If travel for a nun of the 12th century wasn’t outrageous in itself, the content of what she expected her audience to listen to was often enough a scandal for them. Yet Hildegard was everything but a revolutionary.

Her theology was quite orthodox, her visions strictly ecclesiologically orientated, and her image of man corresponded completely with the biblical basis. What was it then that fascinated people with this woman and to this day makes the name of Hildegard of Bingen appear to be so unmistakably distinct and relevant?
Was it her radical honesty, her uncompromising defense of the truth, which she saw in the heavenly light and which at the close of the first millennium, no one supposedly wanted to hear about anymore? Was it her powerful language rich with imagery that knew how to bring „old“ truths close to people in quite a new way? Was it her truly cosmic theology that made the inseparable unity and meaningfulness of all life appear in a totally new light? Hildegard was and is a person who can stir us, a thorn in the flesh of the church and the world.
She was a prophet in the true sense: unafraid, clear, and consumed by the fire of radical discipleship. To the very end she remained a champion of a faith, that was to be fully lived, and an advocate for love and justice. An event shortly before her death shows this again: Hildegard had the body of a young nobleman buried in the cemetery of her convent, who had previously been excommunicated, but by receiving the sacraments before his death had returned to the church.

The bishop of Mainz’s prelates, who did not know about the young man’s change of ways, demanded the body to be exhumed, since he should not have been buried in consecrated ground. Hildegard refused and prevented the enforced handing over by having the cemetery ploughed over, so that the grave of the young man could not be identified. Hildegard’s unwavering attitude was punished with the interdict. The monastic community was deprived of its core: Hildegard was barred from public worship and from receiving communion.

Only after two years of a dogged struggle, the Abbess of Rupertsberg finally achieved the reversal of the interdict. But her remaining vitality had now been exhausted. Hildegard died on September 17th, 1179. A few years after her death, in 1223, the process of canonization was initiated. Why this came to nothing has never been clarified. In a more recent effort the German bishops tried in 1978 to have the title of Doctor of the Church conferred on Hildegard. This attempt, too, was not successful; the statement from Rome made it clear that Hildegard had to be canonized first. But with or without official approval: Hildegard of Bingen has long since been viewed as a Doctor of the Church. Countless people venerate her as a saint and go on pilgrimage in her footsteps. Hildegard’s standing in her own time seems to have been as relevant as it is today. It invites a very personal response – 900 years ago as in our own day – a response that could release unknown creative powers.

The Unity of Salvation and Healing
Nach oben scrollen