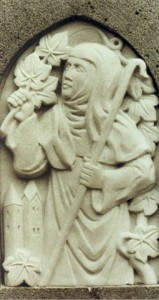 Hildegard also visualized the human need for redemption totally within the concept of the inseparable unity of cosmology, anthropology and theology.

According to Hildegard, the light of divine grace lets man recognize his incompleteness and need for healing. Whoever closes himself to this call and abuses his freedom under the illusion of absolute autonomy enters into guilt and sin, falls ill in soul and body and in the end throws the elements of the cosmos into turmoil.

Salvation and healing can therefore only come from turning to God, from faith that brings good works and a moderate way of life, which brings healing and health in a holistic sense. Hildegard’s concern about man’s salvation is also reflected in an abundance of comments on and ideas for natural healing and therapeutical methods. However, to this day the question whether the works „Physica“ and „Causae et curae“ attributed to her, which deal on the one hand with the description of certain medicines and remedies and on the other hand with the treatment of illness, are really hers in their entirety.

To this day we are mostly left in the dark about the sources and history of written records of these works. However, without any doubt, Hildegard’s lasting contribution is her holistic and complete view of man and the world as God’s creative work, as the „Opus Dei“, which on the one hand is a pure gift of the grace of God, on the other makes man a co-creator and gives him the clear and demanding task to work on structuring the world in a humane way.

1098
Hildegard born in Bermersheim near Alzey

ca. 1112
Enters the hermitage of Jutta of Sponheim, a recluse living near
the monastery of Disibodenberg

1136
Elected abbess of the convent, which had developed from
the hermitage

1178
Conflict with the administrators of the diocese of Mainz, who
impose the interdict on the convent of Rupertsberg

ca.1180-1190
The monk Theoderich finishes the Vita which Gottfried started

17.09.1904
Benedictine nuns of the Abbey of St Gabriel in Prague settle
in the newly built Abbey of St Hildegard above the former
monastic site at Eibingen