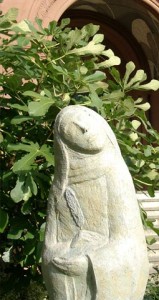 With her third main work, the „Liber divinorum operum“ (World and Man), which she completes in 1174 after 11 years of work, Hildegard scores another big hit. This colossal work of the cosmos lets the world shine in the eye of the reader as God’s work of art. Out of the elemental force of God’s love flows the creation, the incarnation in the form of the Son and the final redemption of man, who has lost his way, at the end of time in an all-embracing unity.

Man appears as a microcosm, who reflects in his physical and spiritual condition the laws of the whole cosmos (macrocosm). In man, God has portrayed the other creatures and in the human form ordered the building of the firmament and of all of creation accordingly.
„Just as an artist has his moulds with which he makes his vessels“, writes Hildegard, „so God forms man after the structure of the world’s fabric, after the whole cosmos.“

For Hildegard, the basic forms of being are the circle and the cross – symbols of divine love, union and redemption as well as signs of time and eternity. Hildegard’s visions of the cosmos were given a totally unique expression in colourful miniatures, which make them clearly visible in images. 42 miniatures in all are recorded (35 in „Scivias“ and 7 in the „Liber divinorum operum“). All of them were probably not created under her direct influence, but only shortly after her death. Particularly incomparable are depictions of man in the wheel of the cosmos, as is divine love in the form of a woman and the representation of the vision of the Trinity.

Especially striking is the extensive symbolism of colour, taken from medieval iconography, which Hildegard and the painters of miniatures amongst her followers use. Time after time it directs the understanding and interpretation anew to the main basic concern of Hildegard’s work, which she summarizes at the end of her third work in this way: „And again I saw the living light and I heard a voice from heaven, which taught me these words: Now praise be to God in His work, man. For the sake of his salvation He fought the mightiest battles on earth…“