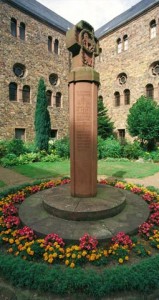 We owe the plan to found a new convent, which would revive the old religious house at Eibingen and also be a link to the one destroyed by the Swedes at Rupertsberg in 1632, to Bishop Peter Josef Blum of Limburg (1842-1883). Through his efforts and those of Ludwig Schneider, who was parish priest at Eibingen between 1840 to 1864, the veneration of St Hildegard received a new and decisive impulse in the 19th century. Bishop Blum, who was driven from his office during the Kulturkampf (struggle between the Prussian State and the Church 1872-87), was offered refuge by Prince Karl zu Löwenstein-Wertheim-Rosenberg at his castle Haid in Bohemia. The bishop’s successor, Dr Karl Klein, also had close ties with the royal family and involved them from the beginning in his plans to revive the old convent of Eibingen.

The prince took up the idea enthusiastically, as it meant a lot to him to be able to restore the secularized estate, which had been awarded to his family by the Reichsdeputationshauptschluß of 1803, to the church in this way. His oldest daughter Benedicta, a nun at the Abbey of St Cécile at Solesmes in France, was to be the first abbess of the convent to be re-founded. When she died unexpectedly on July 2nd, 1896 at the age of only 36, Prince Löwenstein nevertheless continued with his project and spared neither expense nor personal sacrifice for the rebuilding of the monastery.
The Abbey of St Hildegard was to be built on the slopes above the village of Eibingen. The building material – sandstone interspersed with quartzite – was taken from the hill above the building site. Fr Ludger Rincklage, a monk of the Abbey of Maria Laach and former architect, headed the planning and building work. On July 2nd, 1900, Arch-Abbot Placidus Wolter of Beuron, who traveled to the banks of the Rhine in place of Bishop Dominikus Willi, who had been taken ill, laid the foundation stone of the new monastery.